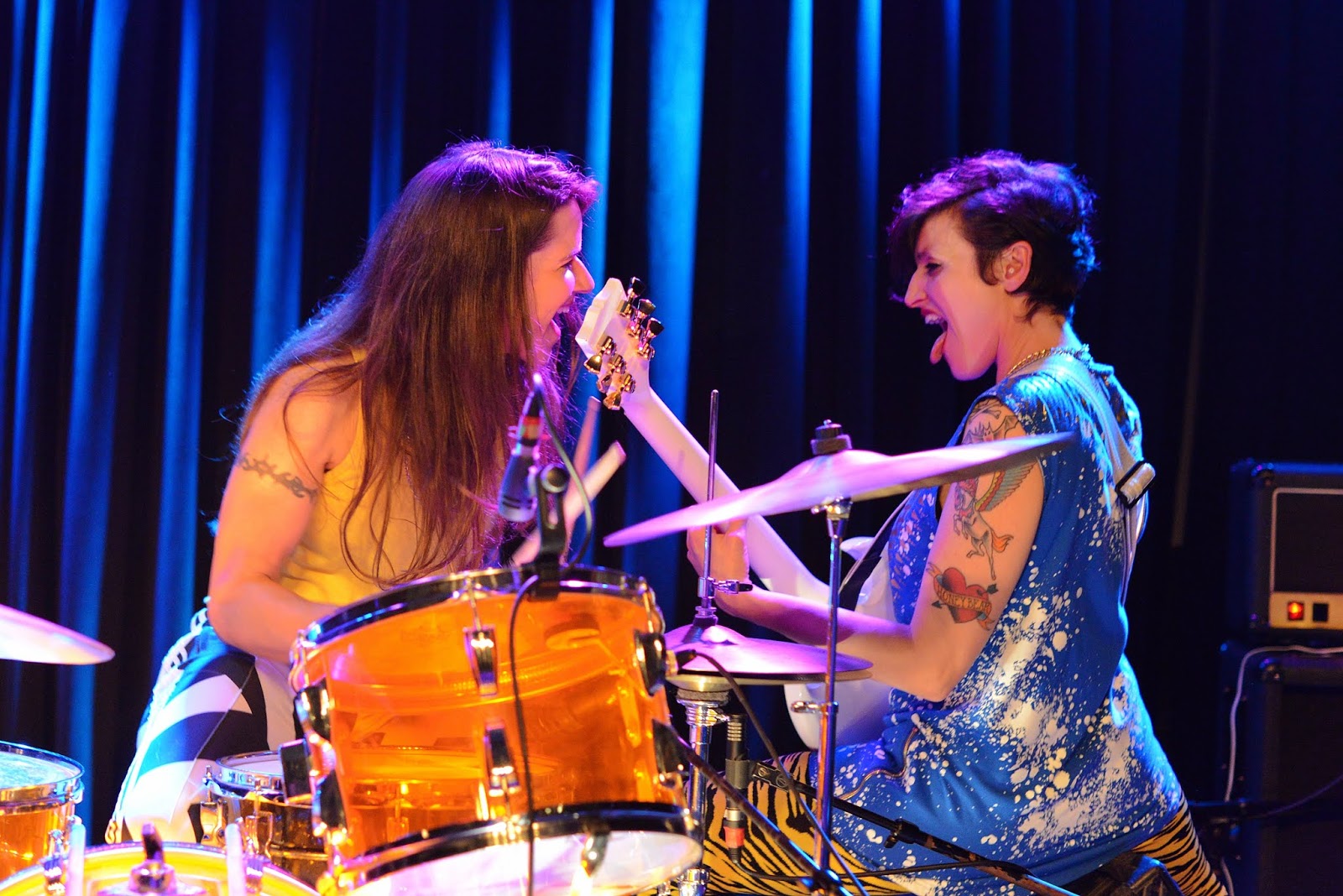 Bat Fangs were one of my favorite new acts from Hopscotch 2017, and when the pseudo-local duo (drummer Laura King is from Chapel Hill, best known for her work with Flesh Wounds, while guitarist Betsy Wright, also of Ex Hex, is from the DC area) announced this record release show I bought a ticket right away.  And a good thing too, because the damn thing ended up selling out!

I got there in time to see the last couple of songs from Solar Halos, one of those local groups I've been meaning to check out for ages but, you know, laziness or something prevented me.  I liked what I saw - the three piece was doing sort of a space metal thing (is that a thing?), and I recognized one of the members as being from Fin Fang Foom.  Minimal (and non-Cookie Monster) vocals, good guitar work, heavy but not overbearing.  I'll have to make more of an effort to catch them again, or at least not drag in late if they're opening a bill I'm already planning on attending.

Much to my great delight, I got to see Pipe again.  Much to my even greater delight, they're still the same band playing the same songs I've loved for the last 20+ years.  They really don't need a review at this point - the gist as always is catchy, sloppy punk with a charismatic singer (Ron Liberti) who is damn funny.  As always, Ron is very quotable - he kicked off with "We’ve got 12 [songs] tonight - pace yourselves accordingly!"; at some point he commented out of the blue "I heard Buddy Holly died last night"; and then for reasons that likely only make sense in his brain, he let everyone know "If you don’t love the moon, get the fuck out."  I need to remember to write down his nonsense every time I see these guys. This was just the tip of the iceberg.

If Bat Fangs aren't already sponsored by Adidas, they should be - between the matching shoes and their love of the brand's signature track suits, you couldn't ask for better advertisement.  Given this was the release of their debut album, you can probably guess that most of their set was them playing their new self-titled record.  Betsy Wright is a natural as a front woman - tons of stage presence, a boatload of charisma, and, as always, bonus points for looking like OG Pat Benatar.  At some point a shitload of balloons got released into the crowd, so it felt like we were celebrating catchy-ass songs and a winning election at the same time.  They closed the evening in grand fashion - a cover of Poison's "Talk Dirty To Me."  You might think that an odd choice, but go back and give that song another listen - hairspray and ridiculous spandex outfits aside, that's a fuckin' gem of a pop song.
2018 Bat Fangs Carrboro Cat's Cradle Back Room Live Show Reviews Pipe Solar Halos