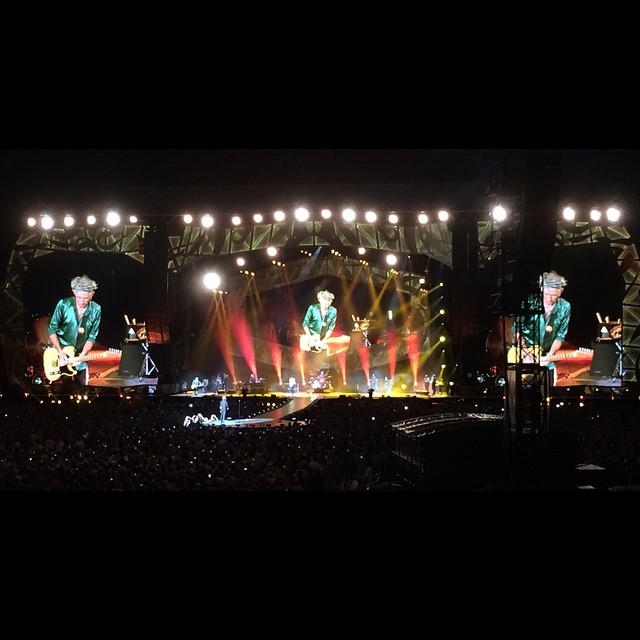 It's not often I go to giant, expensive stadium shows where you can enjoy a corndog or nachos (or both) with your rock-n-roll, but how many more chances is there going to be to see the Rolling Stones?  I know it's a well worn trope, but any or all of the band could keel over from old age any minute now.  The family felt the same as I did, and made the trip down from the hills to join Chelsea and I for this gigantic concert extravaganza.

I've been to a number of NC State football games at Carter Finley, but for some reason the crush of fans looking for parking and walking to the venue seemed ten times greater.  My best guess is that at football games tons of people get there hours early and trickle in slowly through the day, whereas this concert was mid-week after work so everyone was coming at the same time.  Due to my mom's anal retentiveness, we got there plenty early and sat around the parking lot for a while, enjoying refreshments and watching all forms of humanity stream by.  A truck parked a couple over from us was breaking the cardinal rule of playing a band the day you are going to see them, but other than that it was mostly just a bunch of almost-drunk, middle-aged (and much older) white people ready to have a good time.


The Avett Brothers opened.  We saw a couple of songs.  I question that they are all brothers.  I think at one point I commented that it was music for people who wear large neck amulets.  That's all I really have to say on that.

As for the real show - our seats were pretty much dead center, which turned out to be a pretty good spot.  All of the floor seats were crazy expensive (as opposed to the regular expensive where we sat), and unless you were in the very front I'm not sure it was worth it.  They had a penis-like extension that reached out pretty far into the crowd, which Mick and Keith did a fair amount of strutting up and down.  It actually sounded pretty decent where we were sitting, or at least as decent as you might expect from an outdoor stadium show.  The set list was as expected - lots of their most popular songs like "Jumpin' Jack Flash," "Satisfaction," and "It's Only rock-n-Roll" that I honestly never need to hear again.  But they also played a bunch of their other hits that never get old such as "Honky Tonk Women," "Miss You" (that disco bass line will always rule), "Sympathy for the Devil," and "Gimme Shelter."
2015 Carter Finley Stadium Live Show Reviews Raleigh Rolling Stones