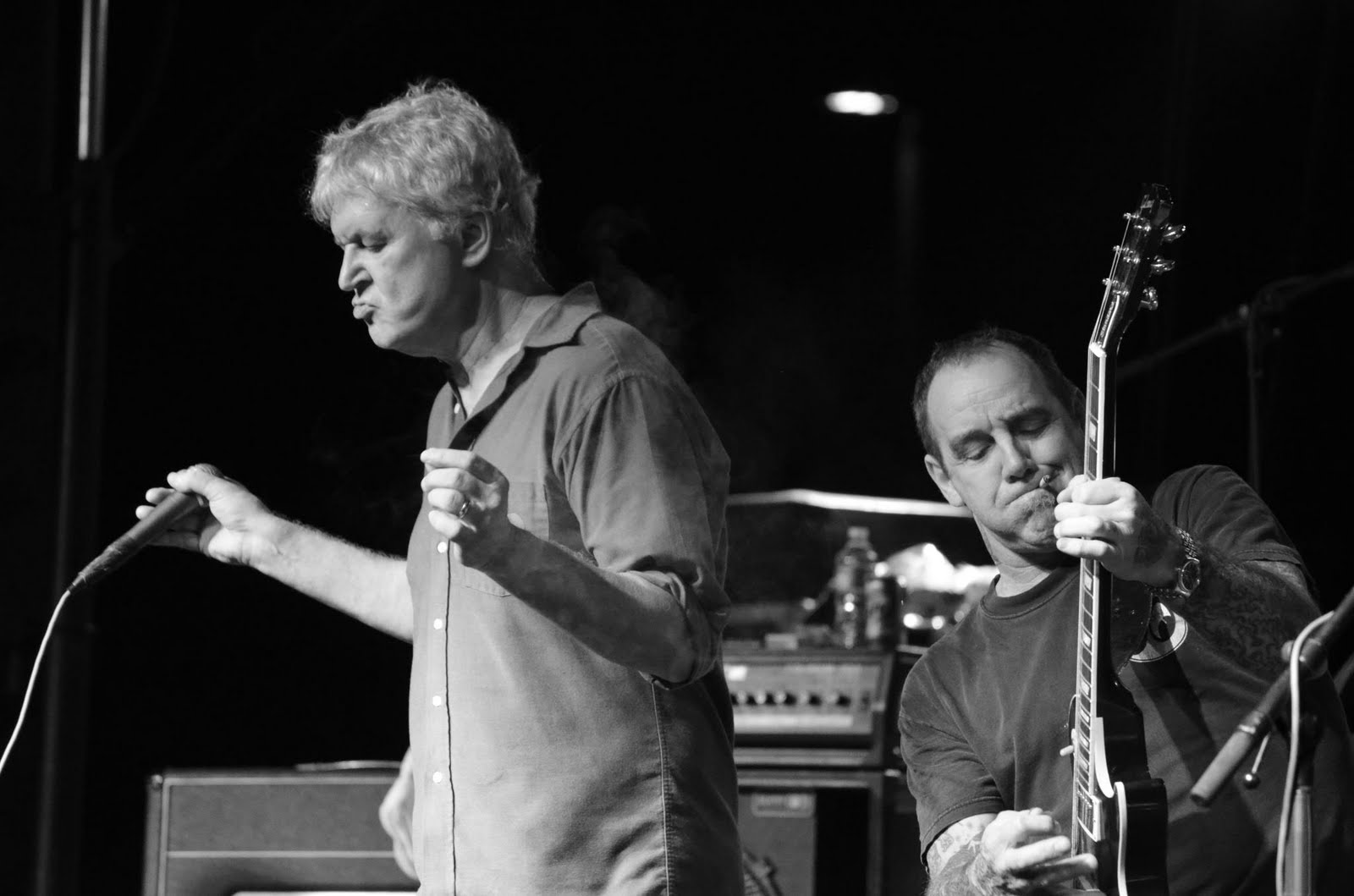 The second day of Hopscotch did not start out according to plan.  Apparently there were photo restrictions to get into the big City Plaza shows, and here I was with my fancy camera and no photo pass.  Luckily, after about fifteen or twenty minutes standing around the entrance feeling sorry for myself, listening to Guided by Voices play but not able to see them, the king of the festival, Grayson Currin, came riding by on his trusty steed and managed to get me past security and into the show.  Many props to Grayson for saving my ass and letting me watch one of my favorite bands of all time play their "last" show.  Yes, they were claiming this was the last GBV show, but I doubt anyone believes it is true.

Regardless as to the finality of GBV as a band or just this lineup or just until Robert Pollard gets a wild hair in a couple of months and decides to reform the band again, they put on one fuck of a show.  I don't think they played a single song older than the "Alien Lanes" record, and I'd guess they played pretty much every song from that album and "Bee Thousand".  It was just classic hit after classic hit after classic hit, the crowd getting more and more excited with each passing song, singing along and pumping their fists in the air vigorously (as I was trying to take photos, I could have probably done with out all the air fist pumping).  If this was really the finale, it was one they could be proud of and I was glad to see them live one final time.

After a brief respite at the new restaurant Chuck's to eat one of the best burgers I've ever had, I trekked over to White Collar Crime to check out Generationals.  I'd never been to this club before, but the name sounds like it would be the name of a skronky post-punk band that would have opened for Wire in 1979...so there's that.  And I have no idea what the hell I'm talking about.  Anyways, this band is from New Orleans, but you'd never guess it from their sound.  They play a very breezy, upbeat brand of pop, and I'm guessing they probably get some comparisons to Vampire Weekend, more so in feel than in actual sound.  Honestly, they had a couple of songs that brought Katrina & the Waves to mind...and I'm not sure why that band would ever come to mind, but there it is.

It took in about 25 minutes of sunny pop before hoofing it around the corner to Deep South Bar to see Bandway.  BANDWAY!!!!!!!!!  Is it wrong I was more excited for these guys than anyone else in the entire festival?  I say no.  And clearly I wasn't only one looking forward to it, as the room was damn near full.  Lots of local rock stars were there as well, as they should be - off the top of my head I definitely saw Ron Liberti of Pipe, Mac McCaughan of Superchunk and Steve Popson of Polvo near the front of the crowd where I was posted up.   I think this officially makes Bandway a "band's band".  They played a really random assortment of songs, skipping a lot of their "hits" like "King Kong" and "Balls Out" and "Millennium" in lieu of some newer songs and more obscure tracks.  But let's get real, they could fart into the microphone for an hour and I'd proclaim it the greatest show ever.  They did end up closing out the evening with "Champagne" and "Four Day Weekend" and at some point Brooks was playing air guitar on a vacuum cleaner while throwing official Bandway wallets onto the crowd.  Yes, it was as awesome as it sounds.  Shit, they brought so much rock they blew out the club's sub woofer.  Not bad for a pair of drunks with a guitar and a tape deck.  And before making my way to the next venue, I spoke the band a bit and word on the street is they will have a new album coming out soon.  Specifically, a new cassette, which is really the best way to be listening to Bandway anyways.  Hopefully that means there will be a release party of some sort to accompany this, and I won't have to wait forever to see them again.

In my Bandway afterglow, I decided to cruise back around the corner just past White Collar Crime to another new club for me - The Union.  Brooklyn band Hospitality, newly signed to Merge, were already into their night-ending set of twee jazz pop.  Imagine Tracyanne Campbell of Camera Obscura fronting the Sea & Cake, and you'll get the general idea with this group.  As I love both of those bands dearly, it was a no brainer I'd like Hospitality (even if my mind was still in drunk cock rock mode).  It was all very cute and sweet and they used the bass like a lead guitar, which was kinda neat.  I guess it was a nice unwind and final band for the evening, and a band I'll gladly see again...but let's be honest I would have traded it for another set by Bandway.
2011 Bandway City Plaza Deep South Bar Generationals Guided by Voices Hopscotch Hospitality Live Show Reviews Raleigh Union White Collar Crime