Showing posts from May, 2002
Show all 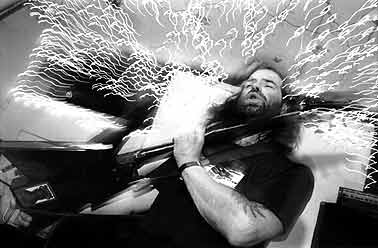 After the last time I saw dälek, I made a promise to myself to never miss another one of their shows again.  And if that meant going to some crazy metal show that they were playing at, then so be it.  Let me say up front that I’m no metal dude, so take my reviews of these bands pretty lightly, and if there are any great omissions or mistakes about them then it’s due to ignorance, not malice.

When I arrived, Thrones were almost done with their set.  Or I guess I should just say his set, as it was just one guy.  From what I understand, He used to be the bassist for the Melvins, so that is probably a pretty fitting place to start talking about the music he was playing.  Because that’s exactly what it reminded me of - the Melvins, plus lots of effects.  Although I’ve never been a big fan of the Melvins, the music coming off the stage here was intriguing to me.  It somehow manages to be slow, heavy, and somewhat ambient all at the same…
Post a Comment
Read more
More posts